Trademark squatting in Russia: McDonald's, IKEA and other abusive brands

The “trademark squatting” in Russia began a few weeks ago when hundreds of companies and large groups, during the Russian invasion of Ukraine, decided to take steps to show support for Ukraine against Valdimir Putin.

Apple, Google, Nike, Adidas, Prada, Chanel, Coca-Cola, there are many brands which have lined up against the Russian Federation.

McDonald’s has suspended all commercial activities in Russia for a few weeks, for example. And how did Russia react?

The State Duma has decided to replace McDonald’s with a new brand called “Uncle Vanya”, in honor of the famous Russian author Chekhov. Too bad that the logo is almost identical in shape and colors to that of the famous American fast-food chain! 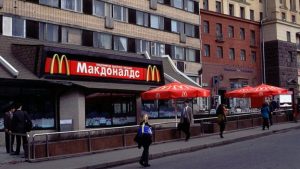 Regarding “Uncle Vanya”, Josh Gerben, a well-known American lawyer who has received national and international recognition for his high-quality legal services, is one of the first to talk about trademark squatting in Russia.

Why is trademark squatting in Russia? Do you know what it is? We’ll start explaining it below.

On Twitter, Gerben wrote: “The illegal occupation of the trademark (Ed., or even trademark squatting) began in Russia. On March 12, a trademark application was filed for the McDonald’s logo with the words “Uncle Vanya”. 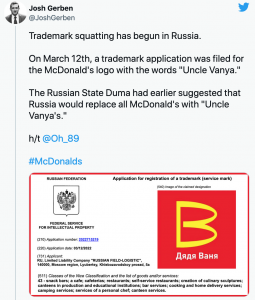 Russia did not stop there. Then it wanted to launch its IKEA counterpart by filing the trademark application for the “IDEYA” logo, which in Russian means “idea”. 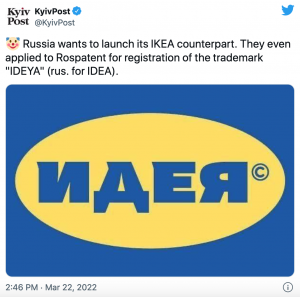 Blue background and yellow writing… doesn’t it seem a bit the same as that of the Swedish multinational IKEA?

The “trademark squatting” in Russia did not stop with McDonald’s and IKEA. The Russian communications authority, in fact, has decided to block access to the Facebook network in the country, declaring that “26 cases of discrimination against Russian media and information resources by Facebook have been recorded.”

Russia, therefore, blocked Zuckerberg’s social networks, and launched its social network in images: it is called Rossgram and would be an alternative social to Instagram.

Also this time the logo of the new “Instagram of Moscow” leaves no space for misunderstandings, and recalls the original one, also recalling its colors. From what we learn from the introduction page to the service below, it was launched on March 28th. 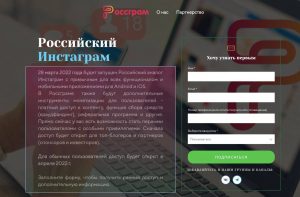 In conclusion, we can speak not only of “trademark squatting”, but of a real digital protectionism triggered by the Kremlin, which aims to sever every link on the web between the West and Russia.

The truths about trademark squatting in Russia: the Chinese did not invent it!

The “trademark squatting” – widespread in China and other parts of the world – is the phenomenon that consists in the registration in bad faith of trademarks by subjects who are not the legitimate owners. The goal is therefore to appropriate a distinctive sign of others to obtain an unfair profit.

The current Russian government, in response to numerous economic sanctions by some countries against the Russian advance in Ukraine, has issued a decree by which it can authorize the exploitation of intellectual property rights. Patents, designs, utility models, everything is valid, even in the absence of the consent of the holders of the rights in question.

As a result of these provisions, the Russian Trademark Office began to receive several trademark applications concerning the trademarks we mentioned earlier. In recent weeks, however, other trademark applications have been filed in violation of the intellectual property rights of other multinationals such as Coca-Cola, Adidas, Audi and BMW.

But how will it end up with all these trademark questions?

First of all, the Russian Trademark Office has yet to examine the applications and the concession or refusal measures will be issued only in a few months. So the situation in the country could be completely different from the current one!

Moreover, it is not yet clear whether the Russian government’s decree extends to trademark and software rights. A confirmation on this point should come in the coming weeks.

However, it is unquestionable that the rules adopted by Russia represent a threat to the minimum standards of protection of the entire intellectual property system and to fair and balanced international trade.

To find out more about our services that protect copyright and intellectual property click here.