Facebook becomes Meta but a company raises its voice against Zuckerberg

It was announced, now it is official. The company that controls Facebook, Instagram and WhatsApp will be called Meta.

This new name that changes only for the company and not for the individual platforms was communicated a few days ago by Mark Zuckerberg.

“The word ‘Meta‘ – explains Zuckerberg – comes from the Greek word that means beyond. For me it means that there is always more to build.” Meta was presented with the symbol of infinity that perfectly reflects the meaning of rebranding. 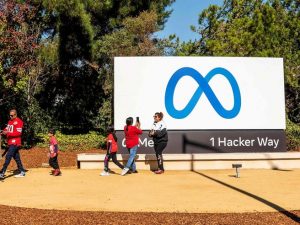 The choice of the new name is also linked to the goals that the company intends to achieve: “All our products, including our apps, now share a new vision: to contribute to bringing the metaverse to life”.

Thanks to the metaverse, the mission of the new company is really to move towards an increasingly immersive platform.

You can teleport like a hologram to be with anyone anywhere!

“In the metaverse you will be able to do almost anything you can imagine,” Zuckerberg said.

A stop sign for Zuckerberg… Meta is already a registered trademark!

Meta, Facebook’s new name, is already a registered trademark. Who is the owner? Meta PCs, an American company from Arizona.

As the Guardian reports, the company – which has about 25 employees and mainly deals with the sale of computers, laptops and software for gamers – filed the trademark in November 2020, so long before Mark Zuckerberg.

“We were not aware of Facebook’s plans until last week, and if they will ask us, we will not sell the name for less than $20 million,” said Zack Shutt, one of the company’s founders.

In the United States, trademark rights depend not only on filing but also on continued use. Zuckerberg could then adopt some strategies to claim rights to the Meta name. A fairly common operation for large companies!

Shutt pointed out that their investments in brand building now risk being totally canceled in the event of a legal battle against Zuckerberg’s giant. Despite this, he wanted to comment with irony on the fact through his social channels.

an announcement regarding our new name from our founder @zackshutt pic.twitter.com/I7tofqPa6Z

According to Angelisa Castronovo, an experienced lawyer specializing in intellectual property, the situation is very sensitive.

“Before filing a trademark, I always suggest to activate a prior art search. This allows you to protect yourself in advance and helps you to check if identical or similar trademarks have been filed before yours. Only at the end of the search the free use and registrability of your distinctive sign can be assured”.

Angelisa Castronovo added: “This service also allows you to avoid the risk of oppositions and legal actions. If Zuckerberg had activated the prior art search, he would have saved in terms of time but also in costs!“.

To find out more about Tutelio’s mission and its battles in supporting copyright and intellectual property click here.