Two series to watch this week!

“Squid Game”, the series with 111 million viewers accused of plagiarism and “The Billion Dollar Code”, the story of Google that copied a German company

Is Squid Game really a plagiarism?

Squid Game, the new South Korean TV series, is the most watched on Netflix: in the first 28 days it reached 111 million viewers, surpassing Bridgerton which had totaled 82 million.

Some fans have noticed, however, that many scenes in Squid Game have several similarities with the Japanese film Kamisama no iu tōri (As The Gods Will), released in cinemas in 2014. Its plot is quite similar to Squid Game, except that the participants are high school students.

Among the first similarities, in the first episode of Squid Game there are the characters who die one after the other during the game “Red Light Green Light” as in one scene of As The Gods Will.

Another much more obvious similarity between As The Gods Will and Squid Game is that both often show a clock with a countdown: as you can see in the image below, a South Korean netizen has published on Twitter a collection of screenshots that compare the film and the TV series highlighting the correspondence between the two products. 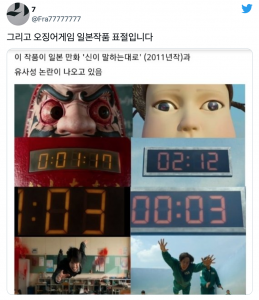 Squid Game has not been accused of plagiarizing only As The Gods Will, in fact some Korean fans pointed out that the tug of war of Squid Game is very similar to a famous Korean comedy program.

The movie director of Squid Game Hwang Dong-hyuk defended himself against accusations of plagiarism declaring that he started working on the script of the series in 2008, before the release of As The Gods Will, and that the similarities are only random, dictated by the fact that the genre of the two products is the same.

Japanese fans are not very convinced by the director’s statements and claim that even if the script was ready, Hwang Dong-hyuk should have made some changes so that there were no identical scenes since As The Gods Will was already out.

What do you think? Who copied? Let us know with your comment!

The billion-dollar code, the true story behind the Netflix series

The giant Google appropriates a revolutionary idea of a group of German nerds and develops it, making their project universal. It sounds like fantasy, but it’s reality.

In the four-episode TV miniseries, the protagonists Carsten and Juri, after the fall of the Berlin Wall, want to break down every barrier and make sure that every place in the world is accessible to everyone.

To build their program, TerraVision, however, they will trust the wrong person who will use their algorithm to create Google Earth.

After a few years, the two German inventors sue Google in a US court for patent infringement.

But what is true about all this?

On of Art+com website, the German company founded by the authors of TerraVision, it is written: “The main characters are freely inspired by real people, but they do not imitate the real protagonists. The filmmakers also left out details for cinematic and dramaturgical reasons. In addition, some elements have been simplified to make the complex field of ‘patentability’ of inventions accessible to the public. The key points of the software development and the court proceedings are however faithful to the real events…” 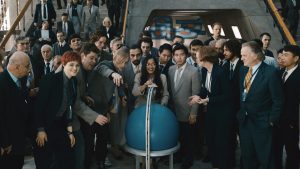 The series, therefore, is an adaptation of some events derived from court transcripts and conversations with Joachim Sauter, Pavel Mayer, Axel Schmidt, Martin Sibernagl and the project manager Gerd Grüneis.

As Gerd Grüneis stated, after the release of Google Earth in 2005, all of them were hurt to see that Google had betrayed them and that it had managed to make the program work thanks to  internet. But why did they wait until 2014, nine years later, to ask for a compensation of one billion dollars for the intentional infringement of their patent?

In your opinion who is right, Google or TerraVision?

And here I end my article. Share the story if you liked it, or click here to find out more about Tutelio’s mission and our battles in supporting copyright and intellectual property.